Posted on June 8, 2015 by Joshua Mapes
Comments off

Well, the 2014/15 season ended too long ago and the new season is taking too long to get here. So, I want to follow up on our ammo review back when I changed to 58 grain VMAX for the ol Ruger 243. Also I will throw in a few tid bits regarding the 17 WSM that I recently, thanks to T.O.T.T.S, won in a Michigan predator contest.

If you remember, I used to handload for the 243. 95 grain sierra MatchKing were the pill of choice, propelled by some odd number grain count of IMR 4350. Cant remember the numbers off the top of my head, but they were accurate. Im talking shooting eggs at 200 yards accurate. But, the damage done to coyote furs? Far more than I expected OR wanted. You see, I am not the kind of guy that goes after coyotes because I hate them and want to see them dead. I want to help control the population, hunt as much as I possibly can, but also USE the animals I harvest. So, putting a hole through a coyote big enough to put a pumpkin through, just wont cut it for me.

I asked the expert, Kevin Rought, what HE would do. He went through his books, or maybe just closed his eyes and dug into the vast assortment and YEARS of knowledge on ammunition, and came up with various different choices for me. We decided to try the Winchester VarmintX 58 Grain Vmax, as well as the Hornady Superformance Varmint 58 grain VMax.

Range tests showed these two different choices were shooting about an inch different than each other, so I sited in the Winchester, blew up some water jugs that showed us that these would expand rather quickly, and hopefully not send 1 coyote flying in 2 different directions.  After that, it was time to wait, and wait, and wait some more until that magical day, July 15 FINALLY showed its beautiful face.

Late July I was finally able to call a coyote into range with the rifle in hand.  Did I call any in before this? Yes.. with the shotgun and YES they both escaped the barrage of Hornady BB flying around them. But thats not what this is about. So late July as the Foxpro sang the bunny blues, a nice male made an appearance on the edge of the hay field I was sitting on. He was watching the field intently, trying to find where Roger Rabbit was breathing those final breaths. Instead he was met with the smell of gunpowder and a 58 grain Winchester to the chest… something he never felt, heard, or saw coming. That was the last sound he heard and that was the first, successful and satisfying test of the new ammo. 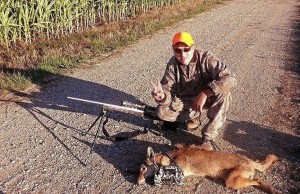 Upon inspection, this male had a small 6 mm hole in the chest, and no exit. EXACTLY what I wanted! Because the ticks and fleas were so bad on him, I didnt take the time to skin him out to see the internal damage, instead he went to a hog farm to be put to good use.

The next stand after this was even better. After a single howl, we had a reply from the corn field. A small pup it sounded like, but these farmers don’t care what size the coyote is, they just want them gone. After 30 minutes of trying everything I could, FINALLY the pup showed his face at around 150 yards. Unfortunately he showed up straight down wind, and the only 2 shots I had were as he was running back into the corn. Both turned up empty, but not long after, a single male came from across the road at about 60 yards. He was also downwind, however started trotting straight away, leaving a wide open easy shot. The trigger broke crisp and down he went, only to get back up for one more round. This time, there was no getting up.

Upon inspection, the first shot connected back in his hind leg, nearly separating it from his body. The second was right behind his shoulder, as any well placed shot should be. He was anchored quickly by this shot, with NO exit wound. 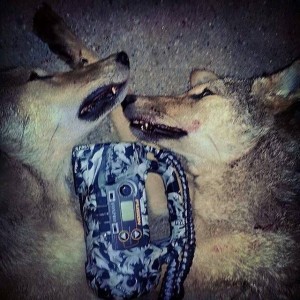 To make this short and sweet, I took a total of 6 coyotes with the Winchester 58 Grain VMax ammunition this season. I hit 1 low, leaving a big tear across his belly, another was placed perfectly in the head…

Long story short, I will continue to shoot the 58 grain vmax. It is what I look for in a coyote round, leaving little to no exit wound which is exactly what fur buyers want in a prime animal fur.

Lets move on to the 17 WSM. This caliber was introduced last year, and was quickly picked up by many predator and small game hunters because of its energy, accuracy and because, well, it was new to the industry. Savage was the only company to have a firearm in production at the time, called the BMag, however a few others have jumped onto the bandwagon and released some new ones as well, including Ruger. Same goes for the ammunition. The first to make WSM ammo was Winchester, but now we have Federal American Eagle, as well as Hornady.

Winchester ammunition had quite a bad spell of ammunition for this caliber for awhile, from brass blowing up to improper/different amounts of powder used in each round. This wasn’t by the box either, it was literally by the round. This left a bad taste in my mouth for the Winchester ammo, but when I received my gun this spring, I tried it anyway. To say it wasn’t accurate would be a lie, as we were grouping somewhere under an inch with the 20 grain as well as the 25 grain, however the 25s held tighter groups from the start. But, none of them exploded in my face, and that was definately a good thing. We also shot at half gallon jugs of water to test for expansion and penetration. The 20s expanded almost instantly, where the 25s penetrated 2 jugs before exploding into the third.

I hadn’t gotten my hands on the American Eagle or the Hornady yet, so I set to the field in hopes of finding a woodchuck to properly test the rounds on. Fortunately for the woodchucks, they didnt show their faces, unfortunately for the Starlings, they are open year round.. and I was able to take 2 down with the 25 grain Winchesters at right around 100 yards. Sorry, no pictures of these ones, but I will tell you that the damage was small, assuming this is because the 25s didnt have enough time to expand on such a small animal.

I finally picked up a box of American Eagle 20 grain ammunition from Kevin about a month ago, and compared them at the target range to the 20 grain Winchester. Point of impact was almost identical, which is awesome in case you cant find that ONE brand you want at the local store. You could pick up a box of either one and still be shooting without the need to re sight in.

I set back out with the American Eagle ammo loaded up with my son, searching once again for a woodchuck. And there, at 167 yards, she stood. I was not comfortable with the shot at that time, so we elected to sneak in closer to try and get within 100 yards. After about 20 minutes of waiting, she showed up again, about 115 yards feeding on the farmers soybeans. I steadied the crosshairs, squeezed the accutrigger, and MISSED! Why? Because my instinct is usually to aim a bit higher that I intend to hit, and the BMag was sighted in 1 inch high at 100 yards. But, she didnt run, she merely turned broadside begging for me to take another shot. And I did, and I connected.

The impact, as you can see, sent a shockwave through the 15 pound chucks body. There was no struggle and there was no suffering, the damage was minimal, and the woodchuck was removed. But, I wasn’t done there. 2 short weeks later I recieved an invitation to come take out a few more problem woodchucks, from an area not far from the first. They said they had a problem with them, and they werent kidding.

As you can see from some of the slow motion impacts, some of the American Eagle 20s created quite a mess. But, these are small animals we are talking about. I wanted this gun primarily for night time predator hunting, but the other small game nuisance critters are the first to tested on. The larger testing will come hopefully as soon as first light on July 15, if a coyote blesses me with its presence.

When that time comes, I will update again on the effects of the 17 WSM ammunition. Until then, shoot straight, kill clean, apologize to no one, have fun, make friends, and take your family. The outdoors are here for US to enjoy. Do it right, do it with respect, and God Bless America.

View all posts by Joshua Mapes→
Notice: This work is licensed under a BY-NC-SA. Permalink: Ammunition review, 243 and 17WSM