Two coyotes, 1 day and many memories

Posted on May 5, 2014 by Joshua Mapes
Comments off

It was Sunday morning, March 23. The weather was just about perfect for a day of coyote calling, and that is exactly what I was planning to do.
The first stand was gorgeous. The small field I would be overlooking was full of deer when I arrived, and I felt this was a positive sign, as deer know to use the wind to their advantage when they choose where to feed. They cleared the field when I walked around the corner, and the sounds of breaking branches and snorting deer was enough to make me wonder if they had taken every other living creature with them.
I decided to set up anyways, video camera, shotgun, rifle, and FoxPro doing the work. The wind was slight, blowing right to left, towards where I had just walked in. Assuming nothing would approach from that area, I set facing the left, hoping a coyote would come from where the deer had gone, and circle in front of me into the open, making for an easy shot.
Group howls played loud and clear on the FoxPro, breaking the crisp morning air. The sound of the first call of the morning was a beautiful thing, and my heart was pumping with anticipation. After a minute, I hit the mute button, allowing coyote pair howls to flow from the hellfire speaker. The sound is amazing..yet bone chilling at the same time.
The video camera was running as a very loud sandhill crane made its way across the sky above me. I panned the camera to the sky to catch a glimpse of what nature has to offer all of us outdoor enthusiasts. As I began to pan back towards the earths surface, I caught a glimpse of a large bodied coyote running towards me, yet still following the tree line. As fast as I saw him, he turned to head the opposite way. Immediately my instinct told me to play some puppy distress, and it worked like magic. The large male came barreling over a small hill, directly towards the FoxPro hanging from a branch 30 yards to my right.
As the coyote came closer and closer, the choice of which gun to pick up was bouncing through my head. When he stopped moving, the decision was made much easier, and I lifted my Ruger MK2 model 77 243 to my shoulder, placed the crosshairs on the big male, and pulled the trigger. The crack of the powder propelling the 95 grain Sierra matchking down the barrel was followed by a hollow thud. The coyote was down, just about 100yards from me 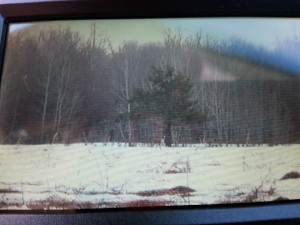 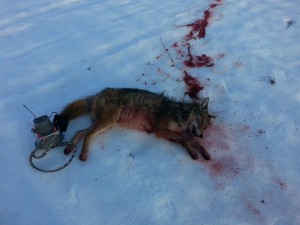 The damage from the bullet was much greater than I had hoped or expected, but Kevin Rought and I decided that possibly I hit a bone, and that caused the bullet to expand more than normal.

After skinning this coyote and getting cleaned up, Kevin and I went to see what we could call in together. We made a few sets through the afternoon with no luck, normal for Michigan predator hunting. But as darkness began to creep its way over us, Kevin decided we needed to make one more stand at last light in an area he had previously called in a triple, but could not get a shot.

We arrived at the location, and immediately found tracks that we assumed were from earlier in the morning. The tracks were headed into a small, yet very deep, ravine. Kevin decided where we needed to set up, so I got my gear together and set while he placed his FoxPro firestorm and Mojo decoy in front of us. My video camera was set to capture the memory of two friends doing what they loved to do, hopefully successfully.

Kevin let out a few short howls with his FoxPro, and shortly after we had a group of coyotes howling at us from what sounded like a few hundred yards away, in the next fence line past the ravine. He again let out a few howls, and the wait was on. No coyotes replied, vocally at least.

After what seemed like 15 minutes(which actually was about 2 minutes) I heard Kevin whisper “We got coyotes coming.” My eyes began to do their dance, in search of the movement that Kevin had seen. Finally on the left of us, a single coyote made his way into the field. Followed by a second, which was then followed by a third.  This was the first time I had ever had 3 coyotes in front of me. I have had doubles and plenty of singles, but 3 was almost a myth, no different than the Rugaru in Louisiana, or Godzilla in Japan. My heart began pumping out of its chest, as they slowly made their way towards us.

When they had finally made their way into a good spot that we could each make a shot, Kevin let out a few simple, quiet, coaxing lip squeaks. Almost immediately the last coyote to enter the field turned and became the first coyote to leave. The others stood there, the lead coyote holding its paw off the ground. Instantly I thought that they were ready to turn and bolt, so I whispered “take the one on the right.” Kevin had heard me whisper, and simultaneously, we pulled the slack from our triggers. The left coyote began its death dance, while the second kicked up smoke in the snow, turning on its afterburners to exit the field. A few more shots were fired, and we had one down. Video footage proves the excitement we were feeling, as words were shared as well as high fives and hand shakes. 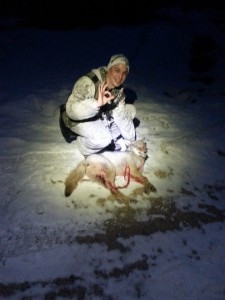 After inspecting this male coyote, we discovered that the 95 grain sierra matchking had also put a very large hole in the hide. The fur on this coyote was beautiful, very thick and very light colored. Unfortunately, the hole was big enough to put a hand or two inside, and that is not what we like to see for fur friendly ammunition. The decision was made that I needed to find another round, something that would either hold together without expanding, or immediately fragment to allow maximum devastation, with little fur damage.

During the week of May 25-30, I will be in New Mexico hunting with a living legend in the coyote hunting world, and I will be testing 3 different loads. First will be a 58 grain VMAX, by Winchester, second will be the Hornady Superformance Varmint 58 grain vmax, and third will be Hornady 3″ Heavy Magnum Coyote BB load for my new Escort 12 gauge, purchased from Tools of the Trade. I will do another, hopefully picture heavy, write up at that time.

View all posts by Joshua Mapes→
Notice: This work is licensed under a BY-NC-SA. Permalink: Two coyotes, 1 day and many memories